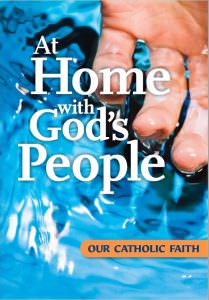 I hadn’t realised until today that the history of “At Home with God’s People – Our Catholic Faith” stretches back to 1982. I suspect that Rob Cosgrove (from Evangelisation Brisbane) was a part of it even in those days. Much has changed but Rob hasn’t! Yet that is a remarkable fact because what you see here with this 2016 iteration is the latest in a whole sequence and it is a fascinating tradition, and I pay tribute, very publicly and sincerely, to Rob for what he has done through all that tradition. It has been a remarkable contribution.

Way back when I was ordained a priest in the 1970s one of the things clergy did was ‘convert instruction’. We had never heard of the Rite of Christian Initiation of Adults (RCIA). In other words individuals sat down with clergy and had instruction and there were various resources that were used – some of them better than others. But then it all re-emerged as the RCIA, which some would say is one of the truly important and lasting legacies of the Second Vatican Council – the fruits of which we are have not yet completely seen realised.

We have perhaps struggled to give full flesh to the vision of what the RCIA is as a journey of catechesis, of ritual, and scripture. All of that is drawn into a great tapestry. The beauty of At Home with God’s People is it draws all of that together precisely into a tapestry. The book is a very polished production. It is extremely sound theologically, very well written and again I pay tribute to Rob and your skills as a producer of resource materials. I think that is well known and this is testimony to it. So I very much hope that this will prove, as its predecessors have, to be a powerful resource within the journey of faith that we call the RCIA. I know it is used, not only in the Archdiocese of Brisbane, and I give the strongest possible encouragement to its use there, but it’s also prized way beyond the boundaries of Brisbane. It is used nationally and internationally, which is again a tribute to the quality of what is on offer.

One of the fascinating things to me is that at a time when the Catholic Church is taking a bit of a bashing, we all know that, and people keep talking about the ways in which the ‘brand’ has been tarnished, but beyond all of that, year in year out there are people who are drawn to the community of faith that we call the Church because they see something more than that which does the bashing and the tarnishing and that is true of us also surely. This resource again deals with reality but in a way that helps us to see more than that which bashes and tarnishes. So I hope is serves individuals whom the Lord is calling more deeply into the experience of faith. I hope it serves Church communities at a time when we need to be strengthened as we move into a future, the shape of which is not clear.

I thank the many who have been a part of the journey stretching back to 1982. Fr Bill O’Shea and Peter Gagen were among the ‘founding fathers’. All of those who have been part of the story tonight I say thanks to and I have the greatest pleasure in declaring At Home with God’s People – Our Catholic Faith, well and truly launched.

To order online copies of the new resource, or to link to sample and chapter titles please visit: http://evangelisationbrisbane.org.au/shop-online/faith-education/home-gods-people/