This week Lawrie is reflecting on this Sunday's gospel John 20:19-31.
Lawrie Knott 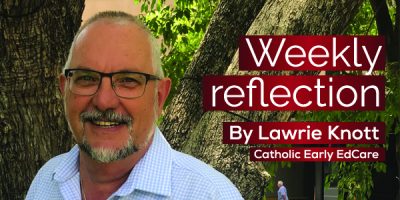 Today’s reading from the Gospel of John, is proclaimed on the second Sunday of Easter in each of the three Sunday Lectionary cycles. This gives us a hint about the significance of this telling of Thomas’ encounter with the resurrected Jesus and the message this encounter holds for our own lives.

It is pretty obvious in this Gospel that Thomas had cut himself off from the rest of the world and his community of fellow apostles after what had happened to Jesus. He had chosen to walk alone and this is understandable – he was grieving and had lost all faith in his world. He had lost hope. As a result, he missed the first appearance of the risen Jesus, but he was there for the second. And in this encounter, Jesus goes straight to Thomas and shows him His wounds. By doing this, Jesus heals Thomas’ own wounds – the wounds of doubt, fear and hopelessness. Jesus reaches out to Thomas, restores his faith and makes him whole again.

Interestingly, this second Sunday of Easter coincides with another very significant commemoration in our lives, the commemoration of ANZAC Day on Monday 25th April. Whenever ANZAC Day approaches, I am always reminded of my favourite ANZAC Day story about Simpson and his donkey, Duffy. I think this story links very well with our Gospel this week. English-born Simpson arrived in Australia in 1910 and a few years later, joined the AIF and found himself at Anzac Cove on April 25th 1915, serving in the Army Medical Corp. Having been wounded, he was instructed to recover and help other wounded soldiers.

Simpson began walking up to the front line and carrying wounded soldiers back to safety where they could be treated. He used a donkey called Duffy to help carry water up to the front line and the wounded back down to the beach at Anzac Cove. Simpson carried out this work under extreme danger, himself often becoming the target for enemy fire. Like Jesus’ actions in restoring faith and hope to Thomas, Simpson restored faith and hope to the soldiers at Anzac Cove. They saw in him, a person selflessly putting himself in danger to help others, a true act of love for his fellow soldiers and these actions restored their faith in humanity and gave them renewed hope in a hopeless situation. Not only did he help heal their wounds, their hearts were also healed by the presence of another who understood their pain and wanted to help.

An indication of the power of Simpson’s actions is that he is well-remembered as a true hero of the Gallipoli campaign, someone who changed people’s lives. Yet, his actions lasted for a mere 23 days. He was killed by machine gun fire while carrying two wounded soldiers back to the beach.

Our world today is full of wounds and the wounded. Faith and hope are waning and people will not ‘believe’ again until they can see and touch examples of faith and hope. Jesus restored that faith and hope for Thomas; Simpson did it for the soldiers at Gallipoli. In this same gospel, Jesus tells us what we need to do. It is now up to us to restore the faith and hope of others.  May we all live in the Light of Christ and reflect his light in our care of one another.