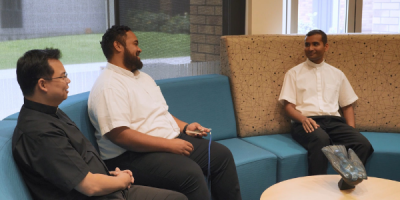 On the Feast day of Saints Peter and Paul, Archbishop Mark Coleridge will ordain three new priests at the Cathedral of St Stephen. The candidates for the priesthood are Francis Fernandes, Jack Ho and William Iuliano. These three men have been Transitional Deacons since November 2020 at Parishes across the Archdiocese of Brisbane. They are all filled with anticipation, excitement and some nerves as they look toward starting this new journey with the One who called them to serve in this vocation.

Listen to each of their reflections that we were lucky enough to catch before their ordination.

Join us at their Ordination on Tuesday 29 June at 7pm here.

“My vocation call was quite a rollercoaster of a journey. There were times where I absolutely didn’t want to be a priest. Those were funny times. There were times where I was absolutely in love with the idea. Eventually, I found my heart being a lot more open to it. I fell in love with it, the ministry and priesthood itself. I feel like I’m prepared for it.” – William