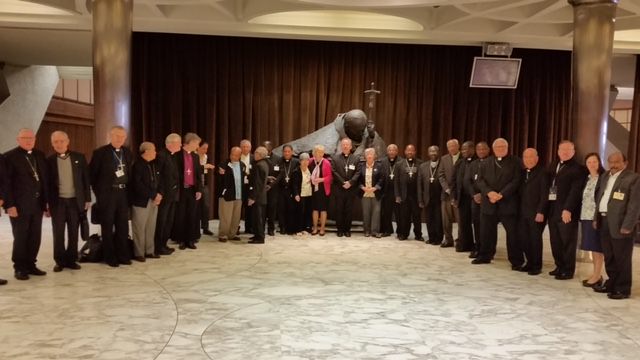 Here’s a photo of my “small” group taken (in front of a huge sculpture of JPII) just after we’d finished our final session. I’m on the far left, next to Fr Adolfo Nicolas, Superior General of the Jesuits. The group included 18 nationalities.

Yesterday we finished work in the small groups. Our group was a very mixed bag, as were all the groups more or less. But English being spoken so widely we had a real jumble of nationalities (18), and voices spoke from vastly different backgrounds, at times it seemed from different planets. It wasn’t always easy to weave a tapestry from this but – thanks in large part to the tact and patience, the tactics and hard work of the Moderator, Archbishop Eamon Martin – we came close enough to it.

It was a challenge to put the final group report together, because Part III on which we were reporting contains most of the hot-button issues, on which there wasn’t always agreement in the group. The final report didn’t gloss over this totally; nor did it give much sense of the disagreement among us. At times our focus, I thought, was more doctrinal than pastoral and that, as a result, we tended to talk in some kind of noosphere which bore little relation to the reality of people’s lives – or at least the lives of the people I serve back home. The word “pastoral” means in the first place that we’re in touch with the reality of people’s lives, not caught in some doctrinal or ideological bubble where things may be beautiful in their own neat way but where you don’t deal with the mess of reality. The group was at its best perhaps when we were sharing our experiences of marriage and the family in our home situations. That’s when you felt we were touching down in the soil of real experience.

At times we wandered away from the focus of the family, talking about issues in global terms rather than within the context of the family. As a result, there was sometimes a feeling that we had to say everything about everything, which is not what a Synod is about – especially when we’re looking at the family which is not a single theme but a whole host of themes. You have to be very focused if it’s not to become unmanageable; and our focus had to be essentially pastoral and strictly within the context of the family.

One sobering thing about the Synod has been the way in which some have imputed bad faith to those with whom they disagree. Some bishops (and others) seemed to believe that there were other bishops determined to betray the apostolic faith and unravel the tradition of the Church. As far as I can see, however, every bishop at the Synod has been keen to do exactly what he’s supposed to do by the oath of his ordination – teach the apostolic faith and hand on the Church’s tradition. Views on what exactly this might mean at the level of pastoral action have varied; but that’s no excuse for imputing bad faith to those who see things differently. The feeling at times is that some think this whole Synod process has been a mistake and that the best available option is harm minimisation. At times in the plenary and the small groups, there has been a whiff of fear, even a kind of paranoia, with some determined to ride into battle to “save the Church”. That kind of partisan spirit can turn brothers to enemies. The Spirit of God does the opposite.

Yesterday afternoon, we were back in the Hall, listening to the 13 group reports as we’ve done twice before. These are published, so you’ll be able to read them for yourself. They need careful attention because they say a lot in a short space. One surprise for me – and this has been an emerging fact – is that the Italians and the Spanish-speakers seem more open to fresh approaches than some others.

After the reports, we had the first round of voting for the Post-Synod Council of 15. Twelve will be elected by the Synod (three for each of Africa, America, Europe, Asia-Oceania) and three more will be appointed by the Pope. No one got an absolute majority in the first round, with votes scattering far and wide, so we’ll have a second round on Thursday.

It’s not clear to me at this stage what exactly the Post-Synod Council will do this time. In the past, the Council has helped draft the Post-Synod Apostolic Exhortation and then helped prepare the next Synod, suggesting topics and so on. But if there’s no Apostolic Exhortation this time – and we still don’t know what the Pope will decide – then the first part of that task will lapse. Perhaps the Council will be asked to help chart the next stage of an ongoing synodal journey, given that Pope Francis seems to see synodality as a permanent feature of the whole Church rather than an occasional feature of episcopal life. We’ll see.

After the voting, the plenary session finished at 7.15pm. But work went on for the group reporters! We stayed on in the Hall to receive our riding instructions. We were told that there were 520 proposed amendments and that these would, again, be assessed by four groups of reporters and experts. I ended up in group 3 with Cardinal Lacunza of Panama, Archbishop Koch of Berlin (both of whom I’d worked with earlier) and Archbishop Laurent Ulrich of Lille. We drew the short straw, being allotted Chapter 3 which is by far the longest and most complicated of the four chapters of Part III with a heap of amendments proposed. Off we went and worked until 10.30pm with a short break during which a cornetto was offered us to keep the wolf from the door. We didn’t finish our work and so will have to return this morning (minus Archbishop Koch who has 400 pilgrims from Berlin in town). We have to have it all done and dusted by 11.30am. I’d arranged a couple of media interviews this morning, so they’ve had to be changed. But journalists here know how unpredictable Synod rhythms can be.

Once we’ve done our work, it all passes to the Commission of 10 who have to write the final document we’ll hand to the Pope. They have a monumental task to prepare a draft for Thursday evening. We’ll all have a look at that and then propose amendments on Friday before the final text is presented for voting (paragraph by paragraph) on Saturday. We’ve come far but there’s still a long way to go in a short time. We’ll all be glad, I suspect, to get to the closing Mass on Sunday and then the airport on Monday.

I can hear the band warming up in the Square for this morning’s General Audience, and I can see the throng gathering to greet Pope Francis. So it’s time for me to head back to the Hall to work on the amendments, spluttering my way though a light cold which is the result of the capricious and unusually cool October weather. The Synod, like the weather, has not been quite what I expected. But the process of discernment is messy, and the Spirit rarely fits neatly into our expectations.