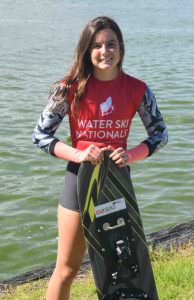 Unity College year 8 student Abbey Teague is making waves on her water skis with recognition at national and state level.

She then went on to represent Australia at the Australia vs New Zealand Showdown in Newcastle, where she equalled the Australian u14 girls slalom record and received silver medal in all three categories as well as silver in overall.

This week, at only 13 years of age, Abbey won the Queensland state titles in all three disciplines and overall division for the U17 girls age group. Abbey now has her eye on even bigger competitions in the next 12 months and her training schedule will ensure even further successes.