Shortlink: archbne.org/khg
Home » News and events » Media releases » Archdiocese to rejoice in the ordination of another priest 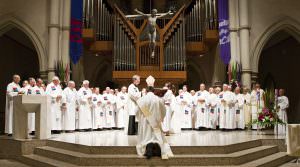 Popular Deacon Stephen Camiolo is to be ordained to the Catholic priesthood at the Cathedral of St Stephen on December 8.

The ordinand will conclude his past five years of seminary study when Archbishop Mark Coleridge ordains him for the Brisbane archdiocese.

Born at the Royal Women’s Hospital to John and Yvonne Camiolo in 1959, Stephen is one of three children along with sister Kacy and brother Gavin.

After completing senior at Kedron State High School, Stephen progressed quite rapidly into the management ranks within the restaurant industry.

After many years with a respected multinational chain he branched out into his own Restaurant and Takeaway business, before serving a final stint as General Manager of a private company operating multiple outlets at the DFO.

In a substantial career change and departure from the industry, he entered into the area of aged care and disability support, completing a Certificate III in the discipline and volunteering at the Emmaus Nursing Home at Nudgee.

During his time as a Seminarian he completed advent placements at Gatton, Laidley and Rosewood, with Fr John Conway and also at Beaudesert parish with Fr Bernie Gallagher.

Sunday placements, undertaken whilst at the Seminary, were at the Cathedral, Clayfield, Redcliffe and Wilston parishes.

Stephen completed his Bachelor of Theology at ACU McCauley Campus Brisbane in 2013.

His pastoral internship was served under the care and guidance of Fr Dan Ryan, Parish priest  at Sunnybank and administrator of Acacia Ridge.

From June 2014, Stephen served as Deacon at the Holy Spirit Seminary, the Cathedral of St Stephen and the Burleigh Heads Parish.

His ordination Mass starts in St Stephen’s Cathedral at 7.00pm on the Feast of the Immaculate Conception.

It will be webcast live at /multimedia/web-cast/ for those friends and well-wishers who are unable to be present.