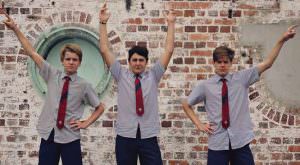 THREE Catholic schoolboys have made their teachers proud for the very thing that would normally send them to detention – clowning around in the classroom.

Liam Adam, Carlin Carruth and Kyle Bennett were named the funniest teenagers in Australia after winning the 2018 for the Melbourne Comedy Festival’s Class Clowns competition for their sketch on awkward school situations.

The boys initially lost the state finals but were chosen as wildcards to battle it out against 14 other young comedy acts at a sold out show in Melbourne last week.

Their drama teacher, Rebecca Meale, travelled to Melbourne to witness her students’ hysterical win and grab a few laughs herself.

Mrs Meale said the sketch, which plays out three awkward school scenarios, resonated with all the teachers.

It includes a scene where a school fights fizzles out and the unpleasantness that can arise at school dances.

“All teachers have been students before, so we can really relate to their sketch,” she said.

She said the audience in Melbourne couldn’t stop laughing during the boys’ set.

“They are now the funniest under-18 comedy act in the country and spent the afternoon signing autographs and mixing with the best comedians in the world,” Mrs Meale said.

The Year 9 students are part of the Catholic school’s co-curricular subject Drama Extension, which offers students opportunities to enter competitions related to performance.