Rome and the Vatican can always surprise, even when you think you know the nooks and crannies well. Yesterday morning I arrived at the Hall with Bishop Eugene Hurley, and we bumped into Archbishop Eamon Martin of Armagh upstairs. He simply opened a door and led us out on to a terrace which I’d never known existed. And it’s his first Synod; Eamon is a quick learner. So out we went on to the terrace overlooking the entrance to the Synod Hall. I felt like giving an Urbi et Orbi. It was an eye-opener for me, and I thought it was worth a video to share my sense of discovery.

On Thursday afternoon we finally finished the three-minute speeches from the Synod members. We were told that there had been 247 spoken interventions and one written. At times it felt like 2247 speeches. It was hard to focus. It was even harder to remember – not just what someone said but whether he’d spoken. It was a bit embarrassing asking another bishop when he was to speak and he replying that he’d already spoken. My feeble reply – given how unforgettable the three minutes would have been – was that, obviously, it must have been when I was out of the Hall working on the proposed amendments with the other group reporters.

The speeches ranged from the anecdotal, to the theological, to the spiritual, to the biblical, to the pastoral, to the poetic, to the ideological. Many were predictable, some were not. The ears tended to prick up if, after 30 seconds, you thought this might be a bit different rather than more of same. In fact, as the procession of speeches rolled on, there was considerable repetition. Certain themes emerged from certain parts of the world, and it’s clearer than ever that what are burning issues in some parts of the world aren’t top of the list elsewhere. That’s what makes me feel that the relationship between the local and the universal is one of the overarching issues of this Synod.

After we’d finished the interventions by Synod members, we heard from a few of the lay auditors which was a welcome change of style, pace and tone. Perhaps we’ve needed to hear more from married people in this Synod.  It was something I suggested during the “free” discussion. I started by mentioning what was said to me by an Australian couple who were auditors at last year’s Synod.  They were keen to stress that this was a Synod about sexuality.  The same thing was said to me in a different way by one of the lay experts at this Synod: his point was that a great deal of the reconciliation and healing that a marriage requires happens in the sexual relationship. I thought too of what another couple in Australia had said to me not long ago – that the trinity upon which their married life is built is the bed, the table and the altar.

So sexuality is at the heart of it, which is why it’s also at the heart of this Synod.  But that’s not immediately obvious when you read the working document and listen to the interventions.  Sexuality has been mentioned, but it’s tended to be muted and abstract – which is perhaps not surprising given the composition of the Synod assembly.  I went on to reflect, as I’ve done in Brisbane, that the Eucharist is in some sense sexual.  At its epicentre are the words of Christ: “This is my body given for you”.  This is what redeemed sexuality is – as distinct from unredeemed sexuality which says: “This is your body taken for me”.  If the Eucharist is in some sense sexual, so too is married sexuality in some sense Eucharistic.  We need to explore that connection more deeply, and in that task married couples have to lead the way.

This morning we’ll hear more from the auditors and that’ll be good.  This afternoon we head back into the small groups. Tomorrow morning we have a big celebration in the Audience Hall (beneath the Synod Hall) of the 50 years of the Synod of Bishops.  There’ll be lots of speeches, including one (I think) from the Oceania rep, Cardinal Paini Mafi of Tonga. Yesterday evening the Secretary General raised a great cheer in the Synod Hall when he announced that we’d have Saturday afternoon off … to prepare us for the Mass on Sunday morning during which the Pope will canonise the parents of St Therese of Lisieux.

The Saturday morning celebration of the 50 years of Synods will look back to Vatican II, which in many ways has been the immediate background of this Synod.  I’ve included below a photo sent to me recently. I said in an earlier post that I’m wearing the pectoral cross of Archbishop Frank Rush of Brisbane who was one of the Fathers of the Council.  In the photo you see the young Frank Rush at a bar on the Via della Conciliazione – I presume after one of the Council sessions.  The other bishop with him is his great friend, Archbishop Guilford Young of Hobart, with cigarette hanging from the lip.  Not sure who the others are.  We’re used to seeing photos of bishops all lined up in St Peter’s in cope and mitre.  Here we see a less formal, more human side of the Council.  A lot of the fermentation, they say, went on in the bars and trattorias of Rome rather than in the hugely formal setting of the basilica. Perhaps that’s happening with this Synod.  Who knows?  As I said to a reporter yesterday, only God sees this Synod whole. 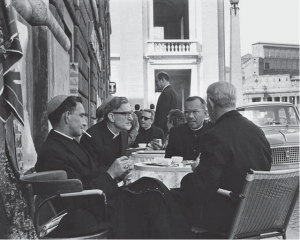