Archbishop Mark was ordained a priest in St. Patrick's Cathedral, Melbourne on 18 May 1974. On 2 April 2012, he was named Metropolitan Archbishop of Brisbane. 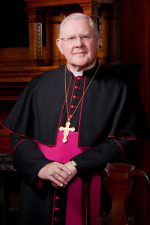 Archbishop Mark Benedict Coleridge was born in Melbourne on 25 September, 1948, the third of five children of Bernard Coleridge and Marjorie Harvey (both deceased).

Archbishop Coleridge’s education was split between South Australia and Victoria, with attendance at primary schools in Tranmere (St Joseph’s School) and Adelaide (Rostrevor College) before the completion of his senior years in Melbourne (St Kevin’s College).

At tertiary level he was awarded an Arts degree, majoring in English and French, from Melbourne University. Initially these studies were undertaken with a view to entering the diplomatic corps, however circumstances changed and he subsequently pursued a vocational call instead. Archbishop Mark’s study for the priesthood was undertaken at Corpus Christi College’s various campuses at Werribee, Glen Waverley and Clayton during the years 1969-74.

He was ordained a priest in St. Patrick’s Cathedral, Melbourne on 18 May 1974 by Bishop John Kelly, then serving as Administrator of the diocese following the retirement of Cardinal James Knox.

After Ordination, he worked as an assistant priest in various Melbourne parishes for a few years before studying Sacred Scripture at the Pontifical Biblical Institute. After four years in Rome and Jerusalem he returned to Melbourne to teach Scripture.

Three years later he was again back in Rome for doctoral studies, after which he returned to teach in Melbourne and was eventually made the Master of Catholic Theological College.

In late 1997 he was both greatly surprised and humbled to be invited to work in the Vatican Secretariat of State.

Four years later he returned to Australia and was episcopally ordained Auxiliary Bishop for Melbourne.

In 2006, he was appointed as Archbishop of the Canberra and Goulburn Archdiocese upon the retirement of the long serving Archbishop Francis Carroll.

In 2011, he was appointed a member of the Pontifical Council for Social Communications.

On 2 April 2012, he was named Metropolitan Archbishop of Brisbane.

Archbishop Coleridge’s move to the Brisbane Archdiocese has elevated him to the role of a Metropolitan – i.e. the head of a See with suffragan dioceses. Although all bishops are deemed to be on equal footing, the Metropolitan See of Brisbane makes Archbishop Coleridge the head of the province of Queensland (which also comprises the suffragan dioceses of Toowoomba, Rockhampton, Townsville and Cairns).

In reflecting upon his four decades as a priest and a Bishop, Archbishop Coleridge has noted that almost nothing had turned out as he expected, but invariably events had turned out better than they would have had he planned them himself.

As he has been moved to reflect “Jesus often surprises, but he never disappoints.”