We’ve just completed the first morning of the three-week marathon.  There was lots of milling around before we actually started – greeting those you know, finding your place in the Synod Hall, sorting through the documentation, making sure you know how the technology works (microphone and voting device).

It turns out I’m sitting next to the Georges Pontier, Archbishop of Marseilles (on my right), and on my left Romulo Valles, Archbishop of Davao, Philippines, who’s an old mate of mine.  Just in front of us are the fraternal delegates, which means the representatives of the other Churches.  I was chatting to the Anglican rep, the Bishop of Truro, who is a rugby fan and was mortified by the Wallabies’ defeat of England.  I was of course suitably jubilant, and all he could do was remind me of the Ashes, which did tend to slow me down a bit.

About five minutes before we were due to start at 9am, in sauntered the Pope just like any other member of the Synod.  There was a time the Pope would enter only when everyone else was in the Hall and would be greeted by courteous applause. But with Francis it’s different: he just strolls in, mingles with the mob, shakes a few hands, exchanges a few words.  It was the same at morning tea: he came down and wandered among the crowd saying hi to various people and (I think) having a coffee.  The style has certainly changed.  It’s strange because neither John Paul II nor Benedict XVI were at all pompous men; but they were middle Europeans of a certain vintage and they had about them an instinctive courtliness.  But not Pope Francis; he’s more instinctively one of the mob.

In the Synod Hall we started with the Prayer of the Church – in Latin and helped by a few of the Sistine Choir.  The Bishops were a bit croaky, but I’m sure God understood.  Pope Francis is a seriously committed non-singer.  During the prayer, Cardinal Rodriguez of Honduras gave a very brief homily setting joy as the true horizon of the Synod – joy in a world too often sad.  Amen to that. 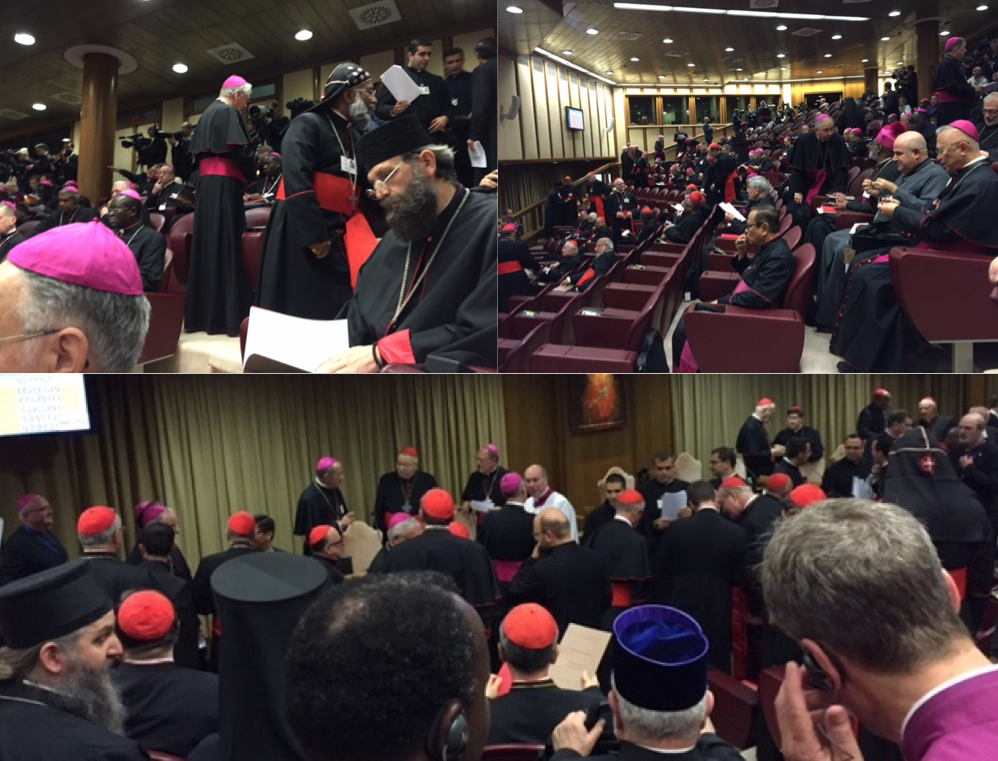 After prayer, we had a short introduction by the Cardinal presiding for the day (the Archbishop of Paris) before Pope Francis rose to speak.  He does rise, by the way; other Popes have sat to speak, but he prefers to stand.  His talk was short and to the point: the Church is not a museum, the Synod is not a parliament where we are trying to forge some consensus or compromise.  Francis took us way beyond politics into the stranger and less predictable world of the Holy Spirit.  He warned that, even with the best of intentions, we can end up separating people from God when our task is to bring them closer to the God who is always close to them.  The supreme law, he said, is the salvation of souls; and he repeated something he said at Mass yesterday, “The sabbath was made for human beings, not human beings for the sabbath”.

After the Pope, we had a long presentation by the Secretary General, Cardinal Baldisseri, setting out a few ground-rules of the Synod and clarifying some procedural matters.  He also told us of a few bishops who couldn’t make it to the Synod, including the two from East Timor … not sure why.  Then came the even longer presentation of Cardinal Erdo of Budapest who’s the Relator General and a key figure in the Synod.  His task was to state where we’d come to in the Synod journey which began back in 2013.  Like Cardinal Baldisseri, he spoke in Italian (not in Latin, as in earlier Synods) and we had the full text of his speech before us.  Mercifully he skipped some bits.  There was nothing new or surprising in it, but it was quite a panorama.

Then we had a few words from the President, Cardinal Vingt-Trois, about how the call to the microphone would work before we listened to a Mexican couple speak about marriage and the family.  They had only three minutes, but they made the most of it.  It’ll be interesting to see how well the bishops stick to the three-minute limit.  It won’t be easy and a few could have the mike turned off on them – which bishops aren’t used to. By the time 12.30 came we were ready for the Angelus and a quick retreat to Maria Bambina for a thoroughly well earned lunch before returning to the Hall this afternoon at 4.30pm.  The work has begun – none too glamorously; but that’s the way of the Synod.