Shortlink: archbne.org/dkwv
Home » News and events » Weekly Reflections » We are all made in the image and likeness of God

This week Juanita is reflecting on this Sunday's gospel Mark 6:1-6. 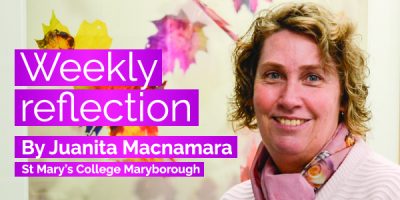 On Jesus’ return to his hometown he taught in the synagogue. The local people were amazed by his wise teachings. They asked each other, “isn’t this the carpenter, Mary’s son?” The local people recognised Jesus as Mary’s son but could not reconcile how the young man they had known had grown into such a wise teacher. How often do we each on meeting someone we once knew, limit them by only seeing them as they were and not as they are now? The people of Nazareth did not see Jesus as he was but rather as he had been as a younger man. They did not acknowledge the change and growth in his gifts and talents.

As humans we are quick to judge, particularly those closest to us; our family, friends and work colleagues. Do we allow ourselves to see others as they truly are today, in the here and now, with all their gifts and talents, or do we hold them back by only seeing who they were at one point in time; as a dependant child, a troublesome teenager, a flawed friend or colleague?

This is a story of not only homecomings but also new arrivals, those entering our towns and cities such as refugees. How do we see ‘others’? Do we limit them as the people of Nazareth did to Jesus or do we embrace their knowledge, experience, gifts and talents that have allowed them to overcome great adversity? The people of Nazareth on hearing Jesus teach in the synagogue, judged him against many factors but failed to see the most important factor that gave his teachings credit; that he was the son of God. As we are all made in the image and likeness of God, the challenge for us all is to see the face of Jesus in all those we encounter, being open to their gifts and talents rather than limiting them and to do the same when judging ourselves.